This past week I issued an updated version of part of my past book on the so-called "Jesus Myth" (the thesis that Jesus did not exist, not even as a person on Earth). The focus of the update was references to Jesus in extra-biblical sources like Josephus and Tacitus.

The update reminded me that one of my chief gauges for whether an atheist is worth any serious attention is their treatment of the reference to Jesus in Tacitus' Annals. I don't think I'm overstating it when I say that my discussion of this reference is the most thorough out there from the perspective of debunking the Jesus Myth thesis. I pulled in works of multiple Tacitean scholars (Syme, Ash, Mendell, etc.) as well as Christian scholars, and I scoured atheist works for any and all arguments I could find. I also keep up on any new ones, if any pop up.

So, whenever I pick up a book by an atheist that I need to review, I immediately turn to the index (or use an online search method) to see what they have to say about Tacitus. That gives me an idea whether to expect a volume worthy of at least some respect, or something better suited for rolling on to a cardboard tube.

By way of example, John Loftus has been giving props to an atheist work by an author named David Chumney, titled Jesus Eclipsed. Now on first glance, this Chumney doesn't seem like your garden variety fundy atheist. Yes, he's an apostate minister, but he was a minister in the Presbyterian church for 30 years. So in that time, you'd think he'd have picked up some notion of how to do things the right way. Right?

Here's a screenshot of his ENTIRE analysis of Tacitus' reference to Jesus, plus a list of the sources he uses. (It does not include background information Chumney provides, like the quote itself.) 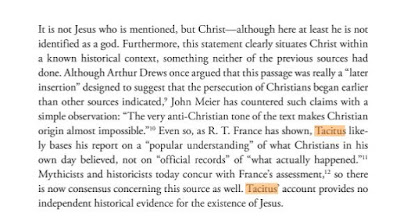 To say this was a pathetic treatment of the issue would be too kind. The two arguments Chumney gives -- that Jesus is called "Christ" and not "Jesus," and that Tacitus based his report on what Christians said -- have been repeatedly debunked; France's assessment is NOT shared by anyone with any level of expertise on Tacitus; Tacitean scholars do NOT regard Tacitus as someone who would be that blase' about his sourcework. Chumney has no sources from Tacitean scholarship. This is a botch job of the worst order, but it is apparently the best Chumney can do on this subject.

So, why is that the case? Is Chumney lazy? Ignorant? Incompetent? A victim of confirmation bias? All of the above? I have no idea, but I do know that anyone who descends to this level of incompetence does not deserve serious attention. Chumney and other atheists/apostates grind out this sort of stuff like clockwork, and in turn it is vacuously promoted by the likes of Loftus. Why? Do they not know or care how this makes them look? Do they not realize that it makes them look as incurious and as uneducated as the Christians they so happily depict as 24/7 Homer Simpson headslap performers?

Maybe it doesn't matter to them as long as they can continue sell their books to each other and sit in their ever-growing circle of mutual high fivers.
Posted by J. P Holding at 9:05 AM No comments:

The Kingdom of the Trolls

For this post I’d like to talk about trolls and the death of expertise. No, I am not combining Tolkein with that excellent book by Tom Nichols. The trolls I speak of (and which Nichols refers to in his own way) are ignorant and foolish people who do things like post silly and stupid reviews on Amazon Books, or post silly and stupid comments on blogs, or write silly and stupid blog posts.


I have in mind in particular a troll on Amazon who goes by the moniker “DS”, but I’ll call him Stumpy. Stumpy has a long-term habit of posting silly and stupid reviews of my books on Amazon, as well as other books, none of which there is any evidence he has read. Not surprisingly, the “Verified Purchase” mark seldom if ever shows on his reviews. Here’s a couple of examples of his reviews, and yes, these are the entirety of what he posts:

J.P. Holding's writings, as usual, seem rather void of intelligence. I would not even give him one stale donut for this book.

No donuts for this book Holding, as you make the same apologetics mistakes you always do.

As you can see, Stumpy has an obsession with donuts. I suspect it’s because he needs to sugar rush in order to fire his brain up in the morning. Either that, or the hole in the middle reminds him of his IQ score.

You’ll also notice that he never explains any of these obviously substantive criticisms. He never gives examples of mistakes, or of how any item he reviews is “void of intelligence”. And I’m not the only author this Chihuahua lifts his leg this way on. Here’s his review of a book titled Resurrection Fact:

The Resurrection nonsense. If you build a case on unsubstantiated anecdotes in 2000 year old ancient mythic sounding tales, then you get a nice apologetics cream of crap.

Nor are scholars immune to Stumpy’s dead expertise. Take for example Stumpy’s entire review of Richard Bauckham’s Jesus and the Eyewitnesses:

And here’s Stumpy’s entire review of Bill Arnold’s Introduction to the Old Testament:

There’s two pointers here about the way Stumpy’s mind doesn’t work. One is that he has this mental ossification which causes him to think that calling something “apologetics” is somehow debunking it or making some kind of worthwhile point. It never occurs to him that any work that presents information is by nature an “apologetic” for whatever point of view is in that work, or whatever facts that work presents or vouches for. His own review is an “apologetic” for a view that this book isn’t any good.

Second, by comparison, look at the endorsements this book has:

"Arnold has provided an introduction to the Old Testament for the twenty-first century unlike any other to date. Recognizing the influence of this collection on the three great monotheistic faiths of today, Arnold explores the significance of monotheism throughout Israel's Scriptures while also providing a thorough, balanced, and informed introduction to the texts themselves. Highly recommended!"  W. Dennis Tucker, Jr, George W. Truett Theological Seminary, Baylor University

"This is one of the best resources I've seen in a long time. The clarity of writing makes this a perfect primer for those who are new to the Bible. The breadth of topics makes it a wonderful review for those who are well versed in the Scriptures. I will be recommending this work to students and colleagues alike!"  Roy L. Heller, Perkins School of Theology, Southern Methodist University

"In this volume, Bill T. Arnold adopts a literary approach to the Old Testament that also pays particular attention to monotheism: one of its signal contributions to religious history. The result is a truly interesting, highly engaging, and deeply relevant introduction. A further boon: Arnold's erudition, considered adjudication of contested matters, and pedagogical savvy are on display at every turn."
Brent A. Strawn, Emory University

So here’s what we have.  Three scholars say one thing. Stumpy says something else.

I’ll bet he’s too stupid to even blink at that point.

I’m far from the only one who has noticed that Stumpy’s a little short on the details and brains department. One review went as follows:

this book sucks. its just typical apologetics. you want truth, here is truth, the gospel writers wrote of Jesus using Hellenistic mythic garb. check out David Litwa's book Iesus Deus and or Cartlidge and Dungan's Documents for the Study of the Gospels 2nd ed and or Charles Talbert's What is a Gospel.

Here are some comments on that review:

This is not a serious book review. It does not discuss the books contents, nor does it offer a mature critique. Its a personal attack and simply cites other books apparently for rebuttal. This book will touch a nerve for many--as it obviously has for the said "reviewer". No one would react as he/she has unless they saw it as a serious challenge to their "faith" (We all have faith in something, even if its against Jesus.) Any book that would rattle a person like that is well worth a look see. I've ordered my copy.


If you look at his rating of book, he rates all books that support belief in Jesus as 1 star and everything that does not as 5 stars. He seems unable to state good reasons why the author is wrong. I do not believe he read those books. If he didn't read them and wrote a review anyway then he would have benefited by Jesus teachings on being honest.


If you want anyone to take your opinion seriously, you need to give more explanation about how you arrived at your conclusions, including addressing specifics in the book itself.

I've read the book and the author gives solid arguments and evidence to back up his claims.

In the end, it’s a lot like what I said in this vid:

The amount of trust and uncritical acceptance some people place in things like Amazon reviews or blogs is pretty horrifying, especially when we know nothing about them at all, as is the case with Stumpy. For all we know, Stumpy, or any person writing a review, or an entry or comment on a blog, could be mentally ill, or they could have a personality disorder. Or they might be someone who has nothing more than a high school education, and has never worked as anything more than a day laborer or a truck driver. Or it might be someone who spends all day doing nothing but leaving troll comments on blogs, writing trolling blog entries on multiple blogs they have started, and writing troll reviews on Amazon or on other neutral websites. Tom Nichols has rightly bemoaned the death of expertise; Andrew Keen has correctly identified the cult of the amateur. Stumpy is a good example of a charter member of that cult.

Stumpy hasn’t completely gotten away with his nonsense, though he is also too thick to get the message of things like those comments, and things like “6 of 149 people found the following review helpful.” Let’s not cease shining sunlight on these trolls and turning them to stone.