A major news item in apologetics came out this week, as it was announced that Hank Hanegraaff, the President of the Christian Research Institute (CRI), had formally joined an Orthodox Church.  This post won’t exactly be about that, though, beyond a few immediate disclaimers and caveats.

First, I have only positive impressions of the Orthodox Church and of Hanegraaff’s decision. Readers may search this blog for a series I did with the title Journey Through Orthodoxy, wherein I make some observations about Orthodoxy. It’s not for me, but some of my beliefs match theirs (and I arrived at those beliefs independent of knowing what Orthodoxy believed).

Second, it’s only fair to remind readers that I have deep connections to CRI and have written extensively for the Christian Research Journal. I also consider the editor of the Journal, Elliot Miller, and his wife to be close personal friends. I have had interactions with many staff members at CRI over the years, including Hanegraaff. Most recently, he and I shared a telephone call during which we discussed eschatology.

Now with all that said, here’s what this post is about: It’s about how certain fundamentalist personalities have foolishly reacted to Hanegraaff’s joining with Orthodoxy. I have in mind particularly a certain brutish thug named Jeff Maples, at the insipid “Pulpit and Pen” blog, where you dare not raise scholarship for fear of being burned at an electronic stake.

Maples loudly bonks his forehead down on each and every one of the piano keys that is hit when a fundamentalist sees someone convert to one of the so-called “smells and bells” denominations (as one other crude item put it). He cites 1 Timothy 4:1 about “deceitful spirits and doctrines of demons,” in spite of the fact that Maples has no theological education to speak of and would find doctrines of demons in the contents of a Chuck E. Cheese menu. He hauls out the same idiotic objection to “graven images” which Dan Barker the atheist uses to condemn everything from the Ark of the Covenant to illustrated Bibles. (Maples has no idea what graven images actually were, of course: They were like phone booths to the gods, unlike Orthodox icons which are more like educational visual aids.) It speaks for itself that Maples is so theologically and historically inept that he unleashes an objection that is exactly the same as that of one of the world’s most ill-educated ex-Christian atheists. And yes, he spews a torrent on how Orthodoxy gets it wrong on salvation, grace, and faith, though you can be sure he has no idea how first century people defined those terms in the context of a patronage relationship, much less would he appreciate the nuances of difference in how those terms are used in each setting.


In light of that, we need the Large Economy Size Irony Meter to celebrate when Maples belches forth that Hanegraaff’s joining with Orthodoxy “should be a testimony of the dismal state of the evangelical church in our modern day. There is a sure lack of biblical truth and doctrinal stability to which many can be left wandering.” Oh really? Mind you: Hanegraaff is certainly in the top 10% of informed Christians today when it comes to truth and doctrine, and it is only Captain Caveman clones like Maples who are screaming their objections – not scholars like Mike Licona, or Craig Blomberg, or Ben Witherington. For an itinerant pixel-scribbler like Maples to use this as an example of decay in the church is like Pee Wee Herman telling Steve Austin that he needs some strength training.

Maples babbles further that this is “an example of what happens when professing Christians elevate something other than Scripture as the final authority on all things.” The funny thing is that Maples doesn’t realize that he “elevates” the English language as a final authority every time he cracks open his Bible (KJV, eh?). Like most such inepts, Maples is oblivious to how defining contexts are part and parcel of the defining of Scripture. They are necessarily “elevated” in tandem.

Such gall as this naturally arouses curiosity in me. So I looked into Maples’ history to see if he might even have a smidgen of authority to run his mouth on this subject. Of course he doesn’t; he’s a classic poster boy for Nichols’ epitaph over expertise. In a paper-or-plastic testimony, Maples testifies mainly to his prior ignorance, saying that he “was one of those who grew up thinking I was saved because I had raised my hand and prayed a prayer…” He also says, “I don’t remember a lot of deep theological bible (sic) study or preaching.” His main concern though is that he “never had a youth pastor or preacher make me uncomfortable enough in my sin to either repent–or leave.” He also didn’t have a youth pastor who fed his brain, apparently.

On Maples goes, telling us one of those typical personal testimonies that sometimes seems more like a sample of pornography than a meaningful account: Lurid detail, not fact, lies at the heart of such stories, as even here where Maples tells us: “Drinking and partying became a prominent part of my life. I felt no guilt over it.” His initial cure for this was to join the military, but while stationed overseas he fell into more partying and drugs, and ended up going to jail. But finally, and thankfully, he got out of that mess and became a Christian.

Anything missing? You bet: The authority to tell off someone like Hanegraaff.
Not one iota of Maples’ biography gives any hint that he has the know-how to judge Hanegraaff or anyone else. Not one seminary class. Not one reference book by a scholar. The best we get is that he went to church with his Roman Catholic spouse, and seems to have been a bit discomfited. After that, we get a few quotes from fundamentalist comfort-food speaker Charles Spurgeon. Obligatory comparisons to the Laodecian church in Revelation. Satan waved around on a popsicle stick. Hangdog laments about how wicked humans are. And this:

We don’t need ignorant people like you running your mouth on these subjects. And you’re a perfect example of the problem of the Internet, where someone who is unschooled as you are, or someone with a personality disorder, or someone who didn’t even finish third grade, has the ability to lash out and disrespect their betters without any justification. You and other babblers like you are not channeling the Holy Spirit; you are not speaking God’s Word, and you are not in any position to tell anyone, not even an atheist, that they need to rethink their beliefs. The mere fact that you have a Bible in your hand doesn’t make you as authoritative as its ultimate author. What you really need to do is shut up and go serve someplace like a soup kitchen.

Of course, Maples would never heed such advice; no doubt the Holy Spirit is telling him right now how he is a righteous saint being persecuted by Holding, who is no better than an apostate. That being the case, all someone like me can continue to do is what I do now – make an effort to make sure caveman like Maples are countered with a loud voice.

I’ve been doing it for years. I won’t be stopping any time soon. 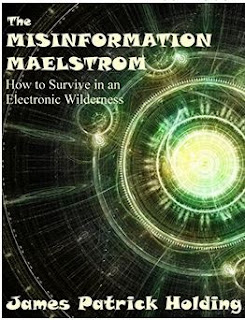 I like to tell people that I've been using databases that worked like Google since long before anyone knew what Google was. Back in the early 1990s, I was learning to use databases offered by a company named DIALOG (they're still around, but much changed) that functioned using the same basic Boolean search principles that are used today by effectively searchers.

The best and most effective way to do electronic searches has never changed. The problem is that most people still have no idea what the best and most effective way to do an electronic search is. Even worse, vendors like Google have encouraged poor use of electronic search tools with all kinds of silly gimmicks and games meant to please advertisers and cuddle up to ignorant users. The "Ask Jeeves" search engine (now just "Ask.com") was representative of one of the stupidest devices to ever be invented for online searches. It coddles users by encouraging them to perform searches in the form of a question. That's a good way to make people feel buddy-buddy with their computer, but it's a dumb way to do research.

I'm not just saying this; there are now a raft of authors who have written extensive works on how the Internet has made us stupider: Nicholas Carr, Andrew Keen, and Tom Nichols, to name a few. I won't say that I saw this coming back in the 1990s, but it wouldn't have been too hard to guess that it was ahead. I took a college course to learn how to search effectively. Simply because we have Google immediately available doesn't mean we're all experts at it.

My newest ebook, The Misinformation Maelstrom, is a collection of essays written mostly by me (with some portions by Nick Peters) that I have been working on and adding to since 2009. By that year, the epistemic disaster that has become the Internet was even more predictable, and I look back now and see that some of the comments I made in 2009 included forebodings of what is becoming more starkly clear in 2017. The issues here transcend our religious leanings; even you fundy atheists out there had better pay attention, because the latest "fake news" crisis is just one more example of how the Internet is making people stupider.

I'll round this off with a surprise: The kind of stupidity engendered by the Internet was known as long ago as the 1700s...and Thomas Paine, the fundy atheist idol, was a pioneering figure in the technique. Read it and find out how.