Irony can be funny. For today, Nick Peters -- who voices NonStampCollector in my TektonTV videos on him -- provides us with a written response to an entry NoSCo wrote (yes, he actually can write, can you imagine?) on a freethought blog. Maybe eventually NoSCo will also get noses for those stick figures of his.


Recently, the NonStamp Collector (NoSCo) posted an argument about Christian morality with someone asking about the holocaust and saying “If Hitler had won the war, would we say that the Holocaust was right?” NoSCo issues a number of statements in reply.


Firstly, we wouldn’t condemn Hitler for having done it. That’s part of the analogy, I know, but it’s worth stating again. We would possibly admire him for having done it, if we were brainwashed enough, although that is not necessary for the analogy to hold. At one extreme we’d praise him for it, at the other, we’d just be hush-hush about it with a tacit acceptance. Chances are there’d be a middle-ground between adoration and tacit acceptance that most people would occupy. All, though, as the example specifies, would pretty much be in line with the idea that Hitler had done the right thing.

Interesting to say that we have to be brainwashed to accept that what Hitler was did was not wrong. This would imply that indeed, we do know that it was wrong. It’s also noteworthy that NoSCo thinks we’d all be in lock-step saying this was right. There was always opposition to Hitler and there’s no reason to think that it would stop had he won the war somehow. Of course, it could be that everyone who disagreed enough would be killed. Could it be NoSCo just would not disagree enough? Still, it is difficult to argue such hypotheticals, but I find NoSCo’s first admission to be revealing.

What we would think, at the very least, is that it had been necessary. That’s the kind of justification that would come out for it, and would be held by just about everyone, even those not necessarily praising Hitler for having done it. We would look back and think, and maintain, that in the case of the early 20th century, things had gotten so bad, or were about to take such a massive turn for the worst, that drastic action had become appropriate, and the genocide had been a viable option, even if not necessarily the only one. For some, it would have been the best option. For others, simply necessary and justified.

There is no reason given for this. Upon what does NoSCo base this? Today, we do not look back at a number of great tragedies in history and think that they were necessary.
If we were all brainwashed by propaganda, as the example mentions, then that propaganda would, again, necessarily, include the idea that the Jews had deserved their genocide. Even if we didn’t share Hitler’s zeal, we would all at least be sitting around saying that yes, there had been extenuating circumstances that had deemed it necessary in that particular case for the Fuhrer to have carried out such an incredible act.

Now, the hypothetical seems to be suggesting, that no matter the propaganda, it would still have been wrong to have carried out the Holocaust. Read it again and check the language. The analogy ends with a kind of suggestion that indeed this is part of the whole moral argument for the evidence for God, as a necessary objective moral law giver. “Would it still be wrong…?” Because, presumably, we all do know that it was wrong. I mean, certainly the world gets along on that assumption.

This is indeed what is being suggested. If something is wrong, it is wrong. There cannot be excuses for it. This does not mean that everything is clearly black and white. There are areas of difficulty in ethics, but the only reason that gray exists is because of the clear reality of black and white. This is the fundamental question that needs to be answered. Was the holocaust really wrong?

Instead, NoSCo ignores the argument with this:

But look again at the picture I was painting there. Doesn’t it look familiar? Making excuses for genocide? Pointing out its necessity? It should be very familiar: It is comprised of exactly the kind of responses that Christians give when challenged on the Old Testament genocides.

Yes, they (very mostly) say: genocide is bad. Objectivity bad. Absolutely immoral. It’s just that in this case, the case of the Israelites entering the promised land, genocide was actually moral and morally necessary. It has to be viewed in the correct context to be correctly understood morally.
Glenn Miller has dealt with the idea of how badly NoSCo is dealing with this, as well as the improper appeal to "genocide". Bt at the start, there is a difference in that Israelites were dealing with the behavior of a people in one region that they (the Israelires) were entitled to be in and were not on a path to have a final solution to the pagan problem. Still, there is something worth noting here.

NoSCo does not deal with the argument.

Instead, he does a tu quoque with saying “Your position is inconsistent!” Well even if that was the case, which it isn’t, it does not mean that NoSCo’s position isn't as well. If NoSCo wants to argue against objective morality, then he has lost any argument against the “genocides” in the OT. If he wants to argue that the events in the OT were ipso facto wrong, then he needs to have a moral basis as the argument suggests, and it has not been given here.

In fact, in the history of Christian thought, this has been the case with Natural Law thinking. The very argument from morality implies this. After all, how could the arguer point to NoSCo’s judgment of right and wrong unless it was to be assumed that NoSCo ought to know this and he doesn’t need the Bible to know it?

Book Snap: A Jigsaw Gude to Making Sense of the World

I'm still catching up after a conference last week, so I'm pleased to have this review by our ministry partner, Nick Peters.
***
Puzzled By This Book 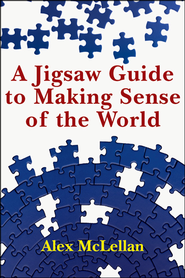