Rick Mattson’s Faith is Like Skydiving is another one of those gateway apologetics books we can always use a few more of; and as before when we review such books, we ask first, “What’s unique about this one?” The answer is hinted at in the title. Mattson has an unusual gift for restating things in analogy as a way to help the reader understand his point. I’m told I have this gift myself, so it’s not an ability I take lightly.

Beyond that, Mattson’s presentation doesn’t offer anything new; we have a standard roster of essential defense points, including New Testament reliability, intelligent design, and the problem of evil. (I should stress that I don’t say that expecting anything new; there shouldn’t be. As in the New Testament world, lack of newness is not a fault for a gateway book – it’s a sign the author is doing their job.)

So, pick this one up for people you know who can’t get the hang of literal explanations. Mattson is a good writer and he does his homework.
Posted by J. P Holding at 7:03 AM No comments: 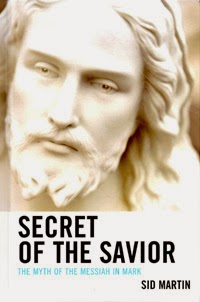 Sid Martin’s Secret of the Savior (hereafter, appropriately, SOS) represents perhaps the two hundredth example I have seen of some rootless commentator assuring us that at long last, he has deciphered the “secret” of understanding the Biblical text. One guy says it is that the NT was imitating Homer; another guy says the NT was a Roman manual for secretly getting the Jews to worship Caesar. Sid Martin’s idea is no less wacky: The NT was actually a coded message to get Jews to remain faithful Jews. Take that, MacDonald and Atwill.

As you might expect, Martin’s methods are as wacky as the ones those guys use, too. Since that’s the case, I’ll give one sample by way of illustration, to show why we need not take Martin any more seriously than the Roman Piso theory.

Martin concentrates on an “exegesis” (to use the word loosely) of Mark in line with his theories. In Mark 1:9-13, Jesus is baptized. Seems straightforward, right? Especially if we know that Mark is in the form of a Greco-Roman biography. Nah, forget it: Martin says the story of Jesus’ baptism is a coded message for the way Moses “baptized” Israel in the Red Sea. Why Mark had to write a coded version of that story instead of using the original is one of those mysteries you’ll just have to wonder about.

So why think that Mark was overwriting Moses? Here are the reasons given by Martin:

Mark starts his account with the words “in those days,” the same words used to introduce the ministry of Moses in the Septuagint. The fact that these Greek words (kai ginomai) are used multiple times in the NT in the same way doesn’t seem to faze Martin, who also fails to mention this fact.

Israel was summoned by God to be His people. Jesus was told by the voice of God that he was God’s Son. No, I don’t see the parallel either. Apparently to avoid a parallel, God would have had to relate that message to Jesus in Morse Code rather than talking like an normal sentient being would in any other situation.

God calls a lot of people His kids in the Old Testament, and calls Himself their Father, and even says He loves them, just like with Jesus. Not that this has anything to do with widespread and typical use of ingroup familial language in that culture; it’s obviously something too unique to be explained by anything other than that Mark is being a Moses copy-cat.

God says He gives Israel His Holy Spirit, like He did to Jesus. This obviously has nothing to do with the Spirit was a covenant broker, and the Spirit’s function as God’s principle of action.

Israel ran around in the wilderness. So did Jesus. Never mind that one did it as punishment while the other did it to meet a challenge of honor than ended in victory. And never mind that retreat to the wilderness was also a commonplace for spiritual meditation (ever hear of Paul?).

Does it ever get any better than this? No, not once. Of course, Martin makes a variety of question-begging statements claiming greater parallels (e.g., John the Baptist stands for Moses), but if you’re looking for hard evidence, the above is all she wrote. And it gets no better anywhere else in the book. In this particular case also, it somehow never occurs to Martin that immersion was a fundamental ritual of Judaism, with precedents in acts like Elijah pouring water over Elisha’s hands (2 Kings 3:11). Martin’s straight line from Moses to John is an absurd oversimplification.

I need only note one more thing to seal the case for Martin’s incompetence. His foolishness is so extreme that he actually resorts to adhering to the idea that Jesus never even existed. By now you know what I’ll do – how does he treat the secular references, especially my favorite of them all, Cornelius Tacitus? Why, horribly, of course. Tacitus is dismissed in a mere paragraph with the old “he was just repeating what he heard from Christians” jig, and the “dah, he called Pilate a procurator” routine. On these flimsy grounds, Tacitus is declared “inconclusive” about a historical Jesus. You can hear Ronald Syme grinding gravel in his grave all the way to Mars on that one.

And so, lick your finger and chalk up one more skein of nonsense to place on your Do Not Call list.
Posted by J. P Holding at 12:26 PM 1 comment:


From the April 2011 E-Block.
***
For this article, I ordered a 1000+ page book (cheap, used!) containing the complete works of Oswald Chambers. The sum of the matter is that while I only found one major problem with Chambers (below), I was able to stop after about 200 pages.

That’s because for the most part, Chambers reads much like a Christianized Course in Miracles -- right down to the tone. Page after page is offered of exhortation and advice, with the Bible mainly making an appearance as the content of headings. From there, Chambers most frequently goes off on any tangent that comes to mind, so that by the time one gets to the end of a section, the original Bible passage seems a dim memory. There is little if any sense of order in these writings, and nothing like a logical chain of thought; like CoM, it is a stream of consciousness presentation in which Chambers evidently took no time aforethought and put down whatever came to mind at the moment he wrote . I thus call this book Chambers’ Homiletic Brick of Text. If he were alive today, he would be making 50-page blog posts that most people stopped reading after the first paragraph.

I say again, though, that mostly, there is nothing wrong with the content, if you are into being exhorted without ceasing. However, the one problem I did find is a rather large one. Chambers makes no use of scholarship in his work, which can be fine if you’re just a devotional writer. However, even a devotional writer should refrain from actively discouraging the use of scholarship, and that is exactly what Chambers does now and then – not in every narrative, to be sure, but enough so that it is cause for unease.

Thus, for example:
Thus it is that I have little more than a single observation about Chambers: I don’t think the resemblance to CoM is coincidence. I think, rather, that his stream of consciousness style (and CoM’s) reflect a state of mind which one can easily, if we are uncritical, suppose to be the Holy Spirit inspiring us. It isn’t – it may be what the ancients called a muse, but there’s nothing holy about it. In the end, while there’s not that much harmful (or helpful) in Chambers, this one reservation is sufficient for me to suggest that readers give him a pass.
Posted by J. P Holding at 7:01 AM No comments:

Between a USDA conference, and transferring all my files to a new system, I'm still swamped, so for this week, here's a recommend link from my ministry partner Nick Peters on synoptic criticism.
Posted by J. P Holding at 8:45 AM No comments: