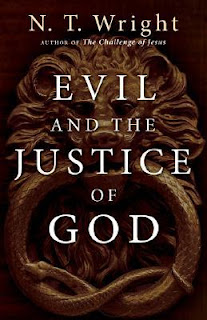 Today we hand the reins to Nick Peters for a review of this book, which is more his kind of thing.
****

Upfront, I will admit I have a huge bias to N.T. Wright. I just consider the work that he has done to be incredible and if I have a chance to listen to him speak, I take it. I was naturally thrilled when I was given the chance to get one of his books for a review and give a critique.

Wright’s book “Evil and the Justice of God” is about God’s answer to evil from a biblical perspective. It is quite a different tone from a work such as Bart Ehrman’s “God’s Problem”, to which my review can be found here. Ehrman reads the Bible and thinks it doesn’t answer the question. Wright instead thinks the whole purpose of the Bible is to answer the question.

What makes the difference is how the Bible is being read. Wright comes from a position of seeking to understand the whole of Scripture, do in-depth background study, and not just go with what the tradition viewpoint is. Ehrman, as we know, comes from a highly fundamentalist and individualistic position.

It’s not a shock that Wright makes the better case then. Wright early on states the problem and that everyone must deal with it. We ask as Christians at times, or get asked “If the world is created by such a good God, why is there evil?” Wright says we can ask it in reverse for the atheist. “Even if you’re an atheist, you face the problem the other way around: is this world a sick joke, which contains some things that make us think it’s a wonderful place and other things which make us think it’s an awful place, or what?” (p. 19)

This was the question of Chesterton as well. How do you explain the problem of pleasure? God could have created a world that was in black and white. He didn’t. God could have created food without flavor. He didn’t. God could have made it that we had to reproduce, but He did not have to make the sexual act so enjoyable. He did. How is this to be explained? If Christians must explain evil, and we should have an answer for evil, let us have the atheist explain good. (Of course, we could just as well ask them to explain any absolutes like that)

Wright also deals with the myth of progress. He sees no way we can say that we are really progressing in morality when we have had numerous wars, including two world wars, Auschwitz, and other events. (p. 23) It is easy to talk about progress if there is no distinctive goal and progress just means the place you have reached when you reach it. (My speaking of Chesterton again.)

To give an example of today, Wright says on p. 24-25 that “We all know that sexual licentiousness creates massive unhappiness in families and individual live, but we live in the twenty-first century, don’t we, and we don’t want to say that adultery is wrong. (We should perhaps note that only two generations ago many communities regarded adultery the way they now regard pedophilia, which is worrying on both counts.)”

The only taboo in fact today is to say that anything is taboo. We let everything go its own way and then wonder why there are so many problems in the world. Evil has simply been reduced often to “That which we do not like.” It is not the case that we have a reason why God should not have judged the Canaanites. We but only need to say “We don’t like it” and already our opinion is justified.

Why should we be given this level of accuracy in judgment? Wright looks at our world where we are afraid to say something is right and wrong and says “We live in a world where politicians, media pundits, economists and even, alas, some late-blooming liberal theologians speak as if humankind is basically all right, the world is basically all right, and there’s nothing that we should make a fuss about.” (p. 25)

Such a view is not even capable of accepting disagreement with its central dogma on a small scale. (Christians standing up for true marriage.) It is incapable of dealing with real actions of evil, such as 9-11, or seeing how the world is not all right, such as in the case of Hurricane Katrina.

What do we need to do? We need to think deeply about good and evil. If subjectivity reigns, then it will be some opinions have power by virtue of the people who have them and not the reasons for them. Even if our opinions are right, we need to know why. As Wright says “Lashing out at something you simply know by intuition is wrong may be better than tolerating it. But it is hardly the way to build a stable society.” (p. 27)

Readers of Tektonics are well aware of the problem of individualism. While Wright does not write on that, he does give a statement that shows an end result of this along with what has been said. He states that “Claiming the status of victim has become the new multicultural sport, as people scramble for the moral high ground in which they can emerge as pure and clean, and everybody else is to blame.” (p. 29)

Part of maturity is accepting your own responsibility. Of course, there are times when someone else is to blame for the suffering of another, but just because you are a target somewhere does not mean that you are a victim. This kind of mindset has allowed too many people to get emotional sympathy from a culture that makes moral decisions based on emotions.

So now let’s get to Wright’s view of the problem. Readers of his work will be familiar with him going back to Genesis to show where the problem takes place and the start of the solution is Abraham. Wright has no patience with our system that goes “Creation, fall, redemption, resurrection.” Wright says that after fall, we should put “Israel.” (That is not in this book, but it is in his other writings and the sentiment is there.)

This means that God called Abraham to form the nation of Israel and Israel was to make things right. Yet Israel herself proved to be part of the problem, in passages such as Exodus 32, a passage rabbis would later look on with shame. Israel often proved to be even more wicked than the pagan nations that were around her. Yet Israel has done two services for the world definitely.

The first is the handing down of the Old Testament so we could know about the problem. The second, is the birthing of the Messiah, who is the solution of the problem. Jesus is the true Israel who succeeds where Israel, and every other human being has failed, in dealing with evil.

Jesus’s life shows what it will be like when God is in charge. The gospels matter. As Wright has said in numerous podcasts, when we look at the Nicene Creed we read “Born under the Virgin Mary. Crucified under Pontius Pilate,” we can then look and see the gospel writers in the background saying “Hold on there! We spent a lot of time on that stuff in the middle!” Wright says this not to fault the creeds. He loves them. He says this to show us that we need to fill in those gaps.

By the cross and the resurrection, Jesus has dealt with the problem. He has set the world aright by His sacrifice and faithful service to YHWH. Now Jesus is enthroned as the king of this world and has given us the charge in the Great Commission that we are to go forth and make disciples of all nations. The solution to the problem of evil is to have God be all in all again just as in the beginning, and to rescue people from their exile from God.

Christians are then to live lives thinking about the resurrection and about the future state, which for Wright is not a blissful pie in the sky eternity, but rather God reigning on this Earth and making this Earth right. We are to live with the knowledge of the future and have that knowledge come and impact our present.

If there is a criticism I have of this book, I think it is that Wright sometimes steps out of his area of expertise. There are times when he comments on economic policy and I do not think he is accurate in what he is saying. This would be the only real problem I have as on a biblical level, it is hard to disagree with Wright.

Despite that concern, I highly recommend this work of Wright, which should be no shock. When it comes to evil, Ehrman is wrong. The Bible does show how the problem has been dealt with, is being dealt with, and will be dealt with. Ehrman is wrong and Wright is right.