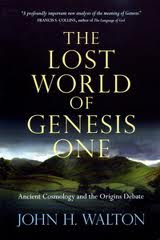 Since I have a dental appointment and a lunch meeting today, I’ll be taking a break from the Ticker and giving the floor to Tekton’s ministry associate Nick Peters, who I have asked to write a review of John Walton’s The Lost World Of Genesis 1, since it is about something outside my expertise and Nick himself is sympathetic to an OEC position.

I’ll be back tomorrow with the first post in an occasional series on what I am reading for fun these days (and what lessons I have taken in for apologetics from that reading!), and then on Wednesday we start a new series critiquing a book by a certain Skeptic…which one? You’ll find out soon! For now, here’s Nick.

***
One of the top in-house debates amongst Christians today is the age of the Earth. Inevitably, the topic of Genesis 1 comes up. YECs will say that OECs are not taking it literally. OECs will say that YECs are taking it in a wooden literal sense. Theistic evolutionists would also make the same criticism as OECs of YECs. Despite our differences, both sides do want to take the text in the best way to understand what the author intended us to mean.

The work of John Walton however opens us up to a new possibility: What if we’ve been going about this all wrong? We today look at Genesis 1 as if it was meant to be read as an account of the material origins of our world. What if instead it was describing the functional origins of our world?

Walton warns us of the dangers of translation, which we already know of. When you read a Bible in English, you are also reading on some level an interpretation as the translators translate the text the way they think it should best read. The only real way to know what the text originally said is to learn the requisite languages. To an extent, we can depend on the works of Hebrew and Greek scholars, but it is best if we can to learn the language for ourselves.

Words aren’t all that separate us from a past culture. There is also, well, culture. As an example, Walton says the following on page 11:

When marriages are arranged and represent alliances between families and exchange of wealth, the institution fills a far different place in the culture than what we know when feelings of love predominate. In that light the word marriage means something vastly different in ancient culture, even tough the word is translated properly. We would seriously distort the text and interpret it incorrectly if we imposed all of the aspects of marriage in our culture into the text and culture of the Bible. The minute anyone (professional or amateur) attempts to translate the culture, we run the risk of making the text communicate something it never intended.

This is an astounding point to make and one that we can so easily miss, especially in our age where we think everything is just like our culture. When we marry today, it is because of love. Surely that’s exactly what was done in the past! Walton is suggesting we take off those blinders and try to see how the ancient world was different.

On page 20, Walton wants us to realize that in the ancient world, everything was brought about somehow by the deity (or in pagan cultures, deities). There were no miracles, but there were signs of the deity’s actions that were favorable or unfavorable. At the same time, this does not mean micromanagement.

The ancients were not interested in a scientific account of the world coming into being at the hand of the deity. They already knew that was what happened. They were more interested in the function of something rather than what Walton refers to as the materialistic origin of it.

In some ways, we still maintain this. If you asked me who I am, I could give my name. I could also say “I am the husband of Allie Peters.” “I am a philosophy student at Southern Evangelical Seminary.” “I am the Deeper Waters blogger.” “I am JPH’s ministry partner.” All of these things were true and all could define me. If I was to respond with something else, such as an account of what is in my DNA, it would be a true account, but it would not be the information you would be really looking for. You more often want to know my place in society.

This is also how Walton says the ancients would have read Genesis 1. What is the place of the cosmos? Through a number of propositions, Walton builds his case for Genesis 1 with it being that YHWH is giving an account of the function of the cosmos with the cosmos rather being seen as the temple of God. The seventh day then takes on all-new importance as at this point, YHWH is entering the temple as the preparation is done and now he begins his reign.

Walton stresses that objects in the Genesis account are recorded for their function rather than their material origins. Light is described as day because it serves the function of establishing daytime. The sun and the moon and the stars serve as functionaries that help light the world. Man in God’s image is the ultimate function as he is put here to represent God’s rule on Earth.

This also brings us into the idea of providence and the doctrine of existence, something a good Thomist like myself delights in. An objection some atheists raise today is “How do we know there wasn’t a God, and maybe when he created it was the last act he did before he ceased to be?” To an ancient, they would have wondered what on Earth was being asked. How could anything maintain its existence apart from the deity?

Such objections can be answered. (All interested in my review from the perspective of Thomism can read my blog starting here.)

The point for Walton however is that we can be so caught up in looking for grand signs of the deity that we forget what the ancients knew. The deity is involved in everything and the blessed doctrine of providence should remind us of that. The deity is not only the cause of material existence but of continual existing of the cosmos.

Supposing all this is true, what does this say about the debates on origins? Walton says there are dangers YECs and OECs can both fall into. For instance, the YEC can accuse the OEC of paying too much attention to science and letting that interpret the text. This idea is concordism with the idea that we must read Genesis to have it fit modern science. The sword cuts both ways. The YEC can be so committed as well to an interpretation of Genesis that they must throw off any science that they think disagrees.

What are we to say? Walton believes the days are to be read as 24-hour periods, but that the text says nothing about when the creation event took place. Everything could have been established in place earlier and this is just God establishing the function of it. I do believe Walton is unclear at this point unfortunately. The result however is that the debate really doesn’t need to focus on the biblical text as the text isn’t meant to address that question.

What we should focus on however is being careful of ideologies masquerading as science. Walton says we should avoid evolution when it is presented as automatically naturalistic. A Christian can believe in evolution as God’s mechanism, but they cannot support (obviously!) evolution in a godless universe. A Christian can support ID, but he cannot say “Science establishes a teleology.”

What we can do is look at the data. If the data indicates a designer, then inferences are drawn from the data to who or what that being is. If the data indicates evolutionary change on a macro level, then that is fine, and inferences can be made, but again, those inferences are not science. To speak of “naturalistic evolution” is to put on evolution an idea of naturalism that cannot be established in the sciences. (See here for a TheologyWeb review of a couple of books of Victor Stenger I did along those lines as some debate on the topic.)

What needs to be taught in science classrooms instead is data and leave the philosophy to other areas. I consider this an excellent idea. Scientists too often are posing as philosophers considering the inferences they draw from the data to be part of the data itself. Walton wants us to avoid that and get back to the main point of Genesis 1. This world belongs to God and he reigns. Whatever method we accept of God’s creation and however long it took, the only point we all need to agree on is that God is responsible for it all. (Walton does say that this includes material origins as well even though the text is not meant to teach that)

One other aspect I liked of this book is that at the end of some chapters, Walton lists references that people can go to if they want more information on technical points. This book is not written in technical language but those who want more can freely go to the references he has given. He also has an FAQ at the end answering questions people have asked about his proposal.

One criticism I have mentioned however is that I do not believe he is clear enough on the meaning of the days in Genesis 1. Walton doesn’t come out and state his view, but I was left wondering how exactly I was to see the days in Genesis 1 in his view. Now, I have my belief on the days of Genesis, but I found his position on that to be unclear.

Still, I heartily agree with the assessment of Davis A. Young on the back cover. We need to immediately read this book. If you especially have any interest in the origins debate, this is the book for you.
Posted by J. P Holding at 7:32 AM