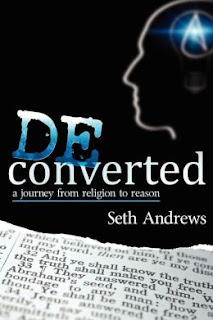 Anti-testimonies of former Christian fundamentalist atheists are a dime a dozen there days; you can't swing your arms without hitting one of these rants in print, which almost universally use the same arguments, voice the same complaints, and boil the same soup. So does anything distinguish Seth Andrews' Deconverted from the rest of the pack of Tweedledums?

Well, there's the fact that Andrews was once a Christian radio host and knew some of the celebrities. But...oh, that's just like Gary Lenaire. Except he wasn't as important. These days he makes YouTube vids as The Thinking Atheist, using his skills as a presenter to make them more interesting than a lot of the atheist dreck on YT. OK, that I understand. I feel the same way on my end at times. So his profile has a few points of interest, which is to be expected. Now how about his arguments?

Okay, here's something. He complains about 20 different ways that God is not a micromanager the way his fundamentalism (derived from the Oral Roberts school) taught him, and -

Ah, here we go! He objects that Pat Robertson and Jerry Falwell felt free to pronounce that events like 9/11 were God's judgment on America, and --

Hmm. OK! This is something. Christopher Hitchens is his hero, and he was also influenced by...uh....Dan Barker, Richard Dawkins, Sam Harris...

Ah ha! This is new! He quotes Mein Kampf to show that Hitler was a Christian!

No, wait a minute. That's not new. In fact I'm debunking that right now. Let's see...does he do anything  besides quote one line from Mein Kampf? Maybe he's found some huge rebuttal to all this research I'm doing showing that Hitler adhered to what amounted to a cult/heresy...

Oh yes! Here's a page where he lists all the Christian scholars he checked out to support his earlier Christian views. Scholars like...

Okay, wait. His mother once challenged him to read McGrath's The Dawkins Delusion. But he asked if she'd ever read it herself and she said no.

Um...did he read it himself, though? He doesn't say. He doesn't even say he read the evaluation of Dawkins by atheist philosopher Michael Ruse that's featured in the blurbs.

Mighty odd there. Does he treat McGrath the way he used to treat atheist lit?

Miracles are crazy to believe in, why? Because they're so out of the ordinary. Flip, flip, flip.

Well, this might be of interest. He relates categories of Christians he's debated online...he calls one set "Theolgians". Hmm, maybe these are the scholarly set, yes? Let's see....he says they offer "wordy diatribes, convoluted analysis...equivocations about the original manuscripts...the historical contexts required and ancient customs required to properly comprehend God's (simple?) [er, no, who said that?] message of salvation thousands of years later." But never mind such people, Andrews says, they can never agree on anything.

Um hm. Okay, so here's in over his head with intelligent Christians on the other side. Never mind. That's not new.

He asks when the last time was an atheist killed someone. Stalin? Mao? Kim Jong Il? Never heard of them either.

But really, what can we expect? Andrews is so out of touch that he thinks that after barely a few months in 2009, he had done enough research to take on apologists.

Hmm. Sounds like the certainty of a fundamentalist who carries nothing but his Bible after a recent conversion, doesn't it?
Posted by J. P Holding at 3:44 AM