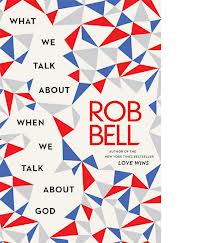 The emergent church specializes in the production of books that combine aptly the traits of having minimal substance while producing maximal annoyance. Rob Bell's What We Talk About When We Talk About God (hereafter WWT) exceeds in both of those categories, to the extent that I could not bear to finish it; I made it to page 110 before giving up.

WWT is exactly the kind of book you might expect from Bell as someone who compares experiencing God to jumping on a trampoline (as he does in a prior volume). If WWT were a picture book, it would be pictures of Bell jumping up and down on a trampoline and shouting, "God! WHEEEE!"

Yes, there is that little substance to it. The first major chapter consists of Bell citing litanies about the wonders of creation, as a sort of vague version of the argument from design mashed in with the argument from beauty. His chapters are given annoying one-word titles like "Both" and "With"; but for all the substance of this book, the contents of each chapter may as well have been one word in total too.

There's not much more that can be said of WWT; there's nothing of value here to any intelligent reader, since the design of the text (which is also annoyingly justified in peculiar ways throughout) is apparently to provide a thumb for persons obsessed with "relevance" to suck on.  Otherwise it's just the usual "right problem, wrong solution" diatribe we're used to from emergent literature.

But there is one piece of good news: In the first 110 pages, at least, Bell didn't say that Mithra was crucified.
Posted by J. P Holding at 3:26 AM