Book Snap: Robert Price's "The Christ-Myth Theory and Its Problems" 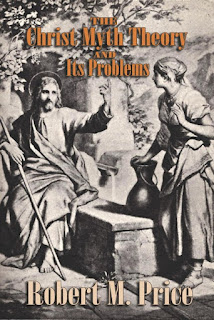 I had earlier noted somewhere that this book (hereafter CMP) didn't mention my own book. It turns out that there's a good reason for that: It's not an original composition by Price, but a collection of older essays from other publications. Still and all, it's a very clear window into Price's rather naive and malformed views of this and other subject matters.

No, there's nothing new here: The usual misreading of Justin Martyr in favor of "pagan Christ" parallels; the usual about silence with respect to the life of Jesus in the epistles (I doubt Price knows even now what “high context” is); Josephus and Tacitus breezily dismissed as hearsay; appeal to the "Remsberg's List" argument (Price still thinks "mere chance" is our best explanation for why Jesus is not referred to in contemporary literature); and still, wild and wacky ideas such as appealing to a 19th century Chinese revolutionary who called himself the "little brother of Jesus" as a parallel to Galatians 1:19  and "James the brother of the Lord". Price remains as promiscuous as ever when it comes to whatever he can reach for to satisfy his insane anger against his former faith.

I mentioned high context. Price is so oblivious on this point that he says of a less detailed form of that argument -- one which merely says that references to Jesus' teachings are allusive - that it "seems to me very strained. It is one of those arguments no one would take seriously except as a tool to extricate oneself from a tight spot. Surely if one wants to settle a question by appealing to the words of Jesus, one will make sure the reader understands that they are in fact the words of Jesus -- by saying so." Well, no -- that's the expectation of a low context reader. In a high context society, the reader does understand that they are the words of Jesus being alluded to. The social sciences send Price into a vortex from which he and his arguments never return.

Another example: If a saying that sounds like one of Jesus' appears in the mouth of e.g., a later rabbi, then Jesus didn't say it; and maybe the rabbi didn't either. The social sciences tell us: No, in reality, we would expect such common lore to be passed around and picked up and repeated by reputable teachers. Despite "higher criticism" and its westernized delusions of competence, common lore spoken by Jesus is exactly what we would expect from a traditionalist society, and that places a burden on critics to explain why, rather, Jesus did NOT say such things. It also never occurs to Price that he is arguing that authors like Matthew are doing in writing exactly what he denies Jesus did in speech.

The bulk of CMP -- about half -- consists of two chapters in which Price strains, grunts, and pulls to find any parallel to Gospel episodes he can wrench from any place at all -- ranging from the OT to the Homeric epics -- in order to declare that ripoff occurred. As is usual of such permutations, the rules are 1) describe everything as vaguely as possible and ignore details in order to force a match; 2) ignore common circumstantial elements that would be present in both stories if they were historical to begin with; 3) remain oblivious to the dictum of Albert Lord and social scientists that reports of historical events would readily be cast into familiar forms, especially in such a way as to echo earlier accounts. It is said by Price: "It is not that Jesus couldn't or wouldn't have shared lore with his colleagues, but rather that we have no business assuming it was so." News flash: the social science facts give us all the business we need to assume it. Strike three from the social sciences ace.

No, make that strike four. Regarding the story of Jesus' temptation, it is said: "Some of the Fellows [of the Jesus Seminar] believed the Temptation story might have been based on a visionary experience of Jesus, but this is to multiply explanations...And what evidence do we have of Jesus having had such a vision? Clearly, someone here is looking for some vestige to hang onto."

Really? Robert Price, may I please introduce you to a concept called "altered state of consciousness" -- something the social scientists tell us upwards of 80% of people in the Greco-Roman Mediterranean experienced. Quite a vestige there, isn't it? This is not the same sort of thing as the giggly, girlish high you get when you read Herman Detering's works, but something quite different. And it renders your resort to the explanation of "stock hagiography" without a shred of support (as if, as noted above regarding their literary practices, it were not already dead.)

Perhaps the most hilarious point of all was this one: "Mark does not speak of 'Jesus' but rather of 'the Jesus' -- as though the name be treated according to is meaning, 'the Savior.' " This is in reference to a point where Price makes much of the lack of an article in Mark 1:9. As I found out long ago, though, Greek seems kind of funny to us that way -- it likes to put articles in front of people’s names sometimes. So maybe Price forgot such things as the references to "the/a Jesus” and  "the/a Peter” when he was drinking his morning cup of caffeinated hatred. (See a link on this grammatical phenomenon below.)

In an ideal world, Price would be divested of his academic credentials for such lunacy and incompetence, and compelled to haul recyclables as a profession. Not that he hasn't come close. The fact that he is compelled to reprint this sort of nonsense either in his own vanity press (The Journal of Higher Criticism), or with non-academic publisher (this one by American Atheist Press), and the fact that he now teaches at a marginal institution (Johnnie Colemon Seminary) is probably as much as can be hoped for in terms of turning him into the academic pariah he deserves to be. I'll do my part, too, as I'll select a few items from here to cover in the E-Block.

Dare I say it again? I will. Bob Barker: The Price is Wrong.